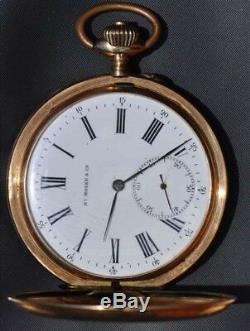 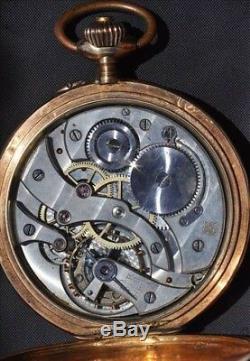 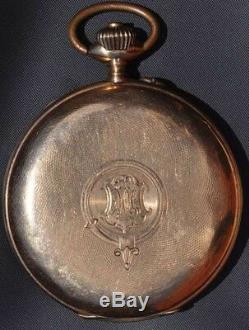 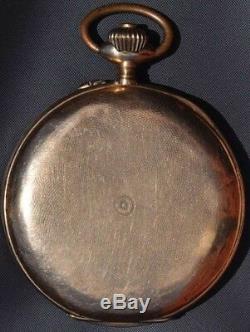 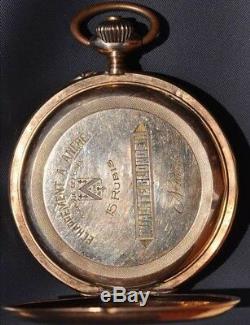 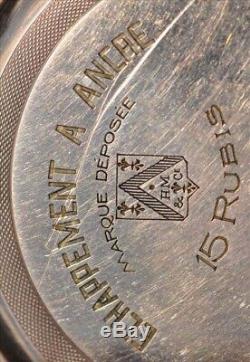 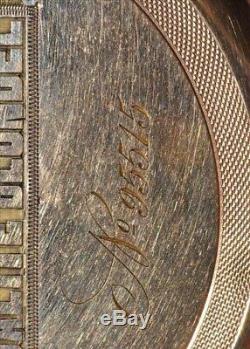 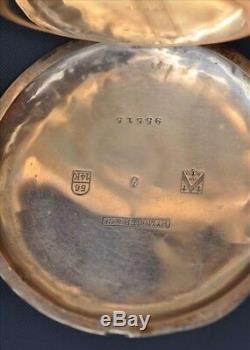 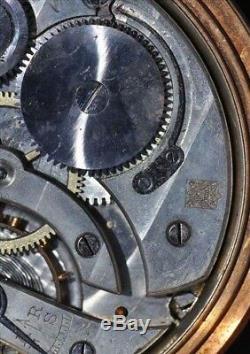 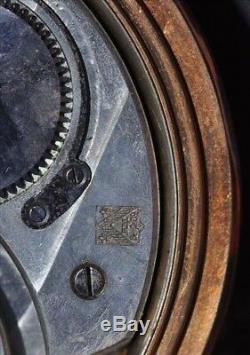 Solid Gold Mens Pocket Watch. T his "Hy Moser & Cie" Solid Gold Mens Pocket Watch is a truly rare find for the unique pocket watch lovers and, especially, the rare antique Swiss International Watch Company (IWC) Schaffhausen collectors! M anufactured in Switzerland by one of the most famous watchmakers, the originator of the International Watch Co. And the official supplier of watches to the Russian Imperial court, Henry Moser in ca.

T he watch is in working order. W ith the original watch-hands and crystal glass in good condition, all covers closing tight and open properly. T he full Hunter Case is made of 56° (14K) Rose Gold and has a Serial No.

This watch has one frontal and two rear covers, external and internal. The presence of the inner lid is a good sign of a high quality watch and is used to protect the mechanism from dust, as well as providing added protection from moisture. B oth, the frontal and the upper rear covers display machined decorations and are inscripted Hy Moser & Cie and hallmarked. The solid gold inner lid also bears the following inscriptions: Hy Moser & Cie, "15 Rubies", "Echappement a Ancre", "Qualite Salter" and Serial No.

Johann Heinrich Moser - The Watchmaker to the Tsars. J ohann Heinrich Moser was born and grew up in Schaffhausen in the traditions and experience of a watch making dynasty that had become established over the generations. Son and grandson of watchmakers, he learned the traditional watchmakers craft from his father, Erhard Moser and from his grandfather Johannes Moser. In 1824, he left Schaffhausen to set up in Le Locle, where he perfected his knowledge in the presence of the greatest watchmakers of the time.

Tsarist Russia at the time was regarded as an excellent labor and sales market and as a sound trading base for watches. After several employed positions as a watchmaker, he founded his own company in St.

Petersburg at the end of 1828. This marked the hour of inception of the greatly successful brand, Hy Moser & Cie.

This allowed him to guarantee the high quality of his products. Eventually, he was made an honorary citizen of Le Locle in acknowledgement of his services to the town in the Swiss Jura. Johann Heinrich Mosers constant quest for quality was crowned by success.

Having become a prosperous watchmaker, Johann Heinrich Moser decided to return and settle definitively in his home town of Schaffhausen at the end of 1848 where he had the Charlottenfels castle built. He became one of the key figures in the town, participating actively in its development.

From this name, he developed the company signature in Latin and in Cyrillic script, which was almost always accompanied by a medallion. Until about 1918, these symbols were the standard signature on all watches supplied by Heinrich Mosers watch company.

I n 1829, Johann Heinrich Moser opened a watch factory in le Locle, which also bore the name Hy Moser & Co.. The Russian operation had to be abandoned in 1917 in the aftermath of the October Revolution.

In about 1920, in Moscow he founded the Central watch repair workshop on the ashes of the Moser watch making factories of old Tsarist Russia. For the seventy-year period of the Soviet Union Henry Moser watches would remain synonymous with work of a superior quality for the leaders of the eastern bloc. A s proof of this, in 1966, the USSR presented one of its high-ranking military staff a Moser pocket watch in 18-carat gold, dating from before 1917 (this collectors piece has now been bought back by Moser Schaffhausen AG). T he name of Henry Moser also died out in this branch of the family in 1923 with the death of Heinrich Mosers only son, who had no male offsprings. Jürgen Lange and the great-grandson of Johann Heinrich Moser, Roger Nicholas Balsiger, jointly with private investors, founded the watch company Moser Schaffhausen AG. Lange also registered the original brand H. Moser & Cie again internationally. It was a time of renaissance for the Moser Schaffhausen AG and the reintegration of the Henry Moser lineage. " H enry Moser" watches were so popular and demanded that there were their fakes.

Therefore, in trading price-lists of these firms, among the list of addresses of shops, types of watches and the prices for them, there were so-called "Cautions". For example, in the Trading price-list of factory of Moser for March, 1906 it is written, that " for elimination of cases of abusing by some dealers by the name of our firm we consider necessary to recommend wishing to get watches of our factory to pay special attention on that - whether it is placed on offered watches per brands available on them and inscriptions in French before a surname "MOSER & Ce" letters "Hy", as only with such brands and inscriptions watches are really products sew factories". T hese cautions are useful and to modern collectors of watches, as well. Today, Roger Nicholas Balsiger, great grandson of Johann Heinrich Moser, heads the companys administrative council as its honorary president.

In the autumn of 2005, for the 200th anniversary of its founder, the company reappeared on the international watch making scene. Add a map to your own listings. The item "HENRY MOSER & Cie antique 1887-1890 IWC Swiss art deco 14k Gold pocket watch" is in sale since Friday, September 1, 2017.

This item is in the category "Jewelry & Watches\Watches, Parts & Accessories\Pocket Watches\Antique". The seller is "antiques-and-collectibles_bt" and is located in Belgrade. This item can be shipped worldwide.