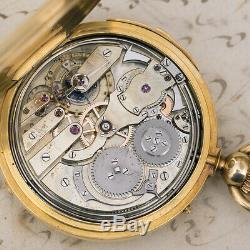 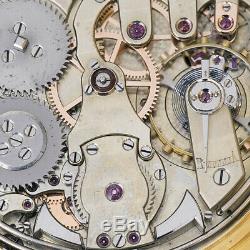 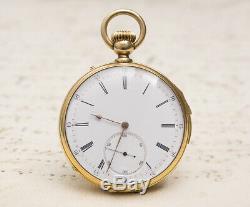 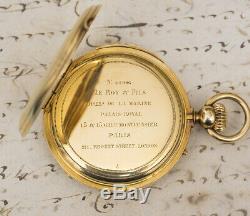 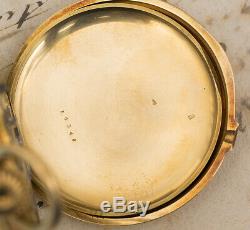 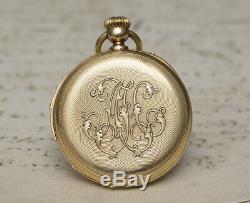 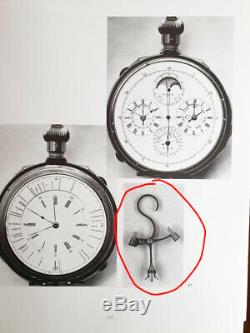 Le Roy et fils The company was founded in 1785 by Basile Charles le Roy. The company became successful and survived the turmoils of the French Revolution. It became the clockmaker to Napoleon I and also was purveyor to his sister Princess Pauline. After the restoration of the Bourbon monarchy, it was a warrant holder for the Duke of Bourbon. The shop in London was at 57 New Bond Street. It was a British Royal Warrant holder under Queen Victoria, and was the only foreign clockmaker that had the British royal warrant. The movement is very high grade - cannot be better.

It's jewelled to hammer, feature gold screwed chaton for centre wheel. Wheels for both trains - watch and repeating are made of solid gold. The escapement wheel sounterpivot is equally golden.

The lever has the "Bishop croook" counter weight. According book "Louis Audemars" by H. Zantke, it was one of the distinct features of Louis Audemars watches p.

The same book mentions p. 65 that Le Roy was one of the buyers of Audemars complicated watches. The winding crown looks quite early, I think the watch can be dated to 1860s approximately. Condition The watch appears to be in good condition.

The movement is in running condition, though I don't guarantee time keeping. Repetition strikes as it should.

Dial is seems to be flawless. Cosmetically watch is quite fine, with some wear to the case. Please look video below the photo. Case diameter is 47mm, height without bow is 58mm. Video will open in a new window.

The item "LE ROY by LOUIS AUDEMARS REPEATER Solid Gold Antique REPEATING Pocket Watch" is in sale since Sunday, April 21, 2019. This item is in the category "Jewelry & Watches\Watches, Parts & Accessories\Pocket Watches\Antique". The seller is "goodoldwatch" and is located in Armentières en Brie. This item can be shipped worldwide.