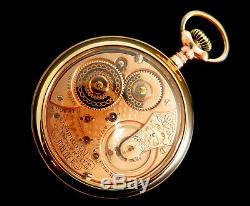 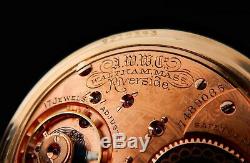 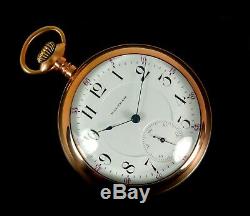 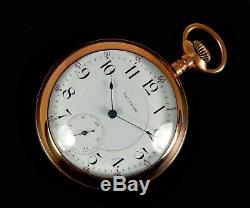 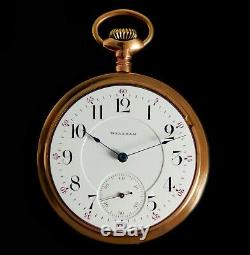 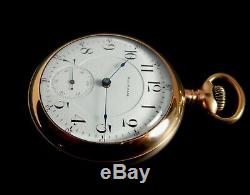 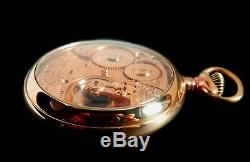 Up for sale is Extremely Rare Beautiful Antique 18s Waltham Riverside Pocket Watch. Salesman Display Gold Filled Case. ONLY 10 Gold Flash Movements OF TOTAL. 4200 WERE EVER MADE for high executives.

Rose Gold movement has a serial number. Which dates it to be.

The Watch size is 18 with 17 Ruby Jewels in Gold settings, Gold Train, Gold balance screws. It's Stem Wind and Stem set. The watch was recently serviced, running STRONG and keeping an excellent time. Please look closely at the pictures as they part of the description.

It took months to adjust the watches to the point where they were any better than other widely available timepieces. Customer Department at the Waltham Watch Company. In 1853, the factory building was completed and the company began doing business under the name American Horologe Company. " The name was changed to "Boston Watch Company in September 1853, and the factory in Waltham, Massachusetts was built in October 1854. The movements produced here (serial numbers 1001 - 5000) were signed "Dennison, Howard, & Davis, " C. The company went through a series of financial reorganizations and renaming's over the next decades. It was reorganized as Tracy, Baker & Co. " and later that same year the name was again changed to "Appleton, Tracy & Co and watches 5001 - 14,000 were produced. The first movements carried the Appleton, Tracy & Co. Waltham During the Civil War Years. In January, 1859 the Waltham Improvement Co. And the Appleton, Tracy & Co. Merged to form the American Watch Company.

The dial department of the Waltham Watch factory. In 1860, as Abraham Lincoln was elected President and the country found itself in the throes of the Civil War, the American Watch Company was faced with serious financial problems. By 1861, business had come to a standstill and bankruptcy seemed inevitable.

The factory was kept in operation through these years by cutting expenses to the lowest possible level... A strategy that proved successful.

In 1923, they became the "Waltham Watch and Clock Company" reflecting the new importance of clock manufacturing, but then in 1925 the name was changed back to "Waltham Watch Company". American Horology owes much to the brilliant visionaries of the Waltham Watch Company. Bacon, Church, Dennison, Fogg, Howard, Marsh, Webster, and Woerd all contributed greatly to American watchmaking. Waltham continued to manufacture watches (and clocks) until 1957, when they ceased production and became the Waltham Precision Instrument Company. Several of the original Waltham factory buildings are still standing, and were added to the National Register of Historic Places in 1989.

The item "Mega Rare Antique Railroad 18s Waltham Riverside Gold Pocket Watch Mint Serviced" is in sale since Sunday, May 3, 2020. This item is in the category "Jewelry & Watches\Watches, Parts & Accessories\Pocket Watches\Antique". The seller is "exlusivewatches" and is located in Mount Arlington, New Jersey. This item can be shipped worldwide.