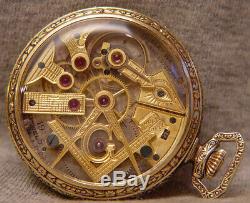 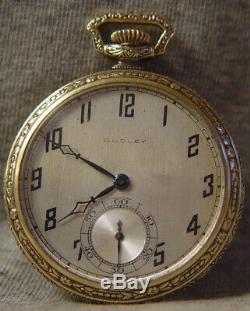 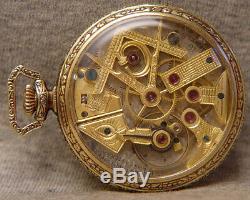 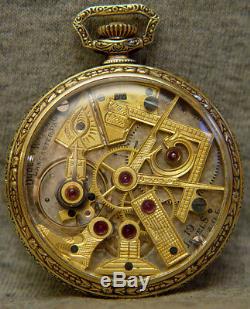 Serial number 1406 rare collectable american 14 size 19 jewel stem wind / stem set recently serviced the watch is in good running order & though i do not guarantee timekeeping the watch kept spot on time for me over a 43 hour period on a full wind housed in it's original solid yellow 14k gold display case note the fine detailing on the bezels clear glass crystals over the front & rear signed DUDLEY on the sterling silver dial with deep blued open diamond hands stunning 19 jewel movement with masonic symbols as bridges for the wheel train & the bible engraved onto the winding wheels plate made under the watchful eye of the man himself sure to please a very scarce great antique american pocket watch in nice condition for the collector to enjoy! This taken from the phoenix masonic watch web site: This is a Dudley, Series 1, Masonic Pocket Watch. Dudley started his own watch company on or about 1922 in Lancaster County Pennsylvania and produced only about 4000 pocket watches.

His Masonic Watch underwent three changes in design on the movement and each was given a series number. This is the rarest of the three series, a series one, of which only about 1400 were made.

You can tell it's a series one by the Holy Bible engraved on the winding arbor plate. It is getting harder and harder to find great, vintage pocket watches and this one was a lucky find, is extremely rare! The crystal appears original, is domed and is perfect. Underneath is the wonderful original dial. The silver dial has a great outer track for the minute hand in black enamel; great black enamel art deco Arabic Numerals; a great sunken and textured subsidiary second track; and is signed in black enamel Dudley. All three hands are blued steel, original, and ornate. The case is 46mm in diameter and 57mm from the case bottom to the top of the original crown and bow.

The case appears to be solid gold, but is not signed anywhere as is normal for this type of watch. The entire case has gorgeous hand-engraving.

The watch has a display back and the crystal on it is original and faceted. I will not even try to describe the awesome movement of the Masonic working tools! The movement is signed Dudley Watch Co. This is a rare watch which runs, winds and sets perfectly!

The History of Dudley Timepieces By Brother C. Julius Clark from his book "Masonic Timepieces, Rings, Balls & Watch Fobs" The "King" of pocket watches and the most sought after is a Dudley Masonic Watch made by a Mason for a Masonic purpose. William Wallace Dudley was born in 1851 in St.

Some years later after completing his apprenticeship, he moved to the United States and joined the Waltham Watch factory in Waltham, Mass. Where he was employed as a model maker. Dudley moved around from one watch factory to another gaining knowledge and experience.

But left at the age of 69 to fulfill his dream of establishing a watch factory. Dudley had seen the the M. Watch made in England with the two Masonic emblems in the balance cock. Deeply interested in Freemasonry, he was a member of both York and Scottish Rites, the Nobles of the Mystic Shrine and the Tall Cedars of Lebanon. According to his daughter, he started working on his first Masonic watch 15 - 20 years before he patented his design.

In 1918, Dudley started to work on a Masonic watch with its bridge plate in the form of Masonic symbols (a slipper, plumb, trowel, level, square, compasses, the Letter "G" and a Bible). These emblem parts were machined by Brother Willis R. Dudley later applied for and was granted design patents dated June 29, 1923. Wood, local retail jewelers and both Masons, became Dudley's partners. On May 20, 1920, they applied to the state of Pennsylvania for incorporation. The letters patent were issued June 7, 1920. Property was acquired at South West End and Maple Ave.

The original project of the company was to design and build a 14 size, 19 jewel, 14kt. Solid gold watch, which is referred to as a Model 1, were being produced. By 1923, the Dudley Watch Company, faced with dwindling sales and heavy competition from other companies producing smaller watches, decided to go ahead with the development of a 12 size, 19 jewel, 14kt.

Gold filled watch, which was referred to as a Model 2, The Model 2 differs from its forerunner by having a silver colored Bible mounted, so as to cover the bevel pinion which was previously exposed. This watch used the wheels and escapement design from the Hamilton models. At full production the company employed 18 - 20 men including Arthur and Clifford Dudley, sons of the founder. As it was primarily an assembly operation, the employees were all high-skilled watchmakers, most of whom had worked in the Hamilton Watch Company.

Those men with Masonic background were given preference. Once production began, sales became the problem, and a salesman named Bostwick started out on the road. By late 1924, the company was heavily in debt and management was trying desperately to find a solution to its problem.

On February 28, 1925, a petition was introduced in the U. District Court in Philadelphia that the Dudley Watch Company be adjudged bankrupt, mostly due because the new wrist watch had been introduced on the market. After leaving the Company, Dudley was in serious difficulties. He had invested all his available capitol in his brain-child and at the age of 74 found himself out of work and nearly broke. He accepted a job at Hamilton Watch Company as a mechanic where he continued to work until 1931, retiring at the age of 80. On February 8, 1938 Dudley died at Lancaster, Pa. Nearly 60 years after Brother Dudley's business was declared bankrupt, his dream has come true and today his watches are considered very rare and its a privilege to be an owner of a Dudley pocket watch. In the 15 years that Dudley watches were produced in Lancaster, less than 2,600 watches of the Masonic design were made. The release of atomic power has changed everything except our way of thinking... The solution to this problem lies in the heart of mankind. If only had known i would have become a watchmaker. If people concentrated on the really important things in life, there'd be a shortage of fishing poles Doug Larson. I may be going to hell in a bucket babe but at least i'm enjoying the ride bob weir grateful dead. The item "Antique 14k Dudley masonic model 1 pocket watch 19 jewels lancaster pa" is in sale since Monday, June 8, 2020. This item is in the category "Jewelry & Watches\Watches, Parts & Accessories\Watches\Pocket Watches". The seller is "edikted" and is located in Jackson, New Jersey. This item can be shipped worldwide.