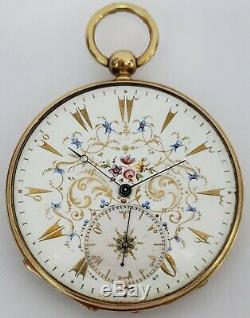 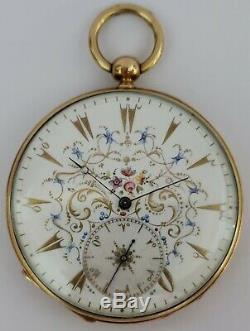 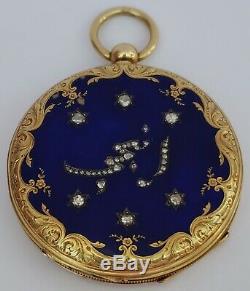 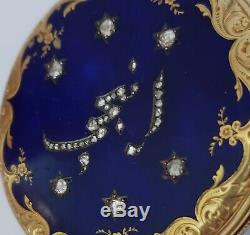 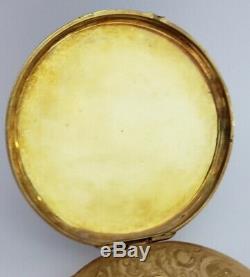 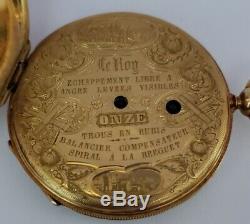 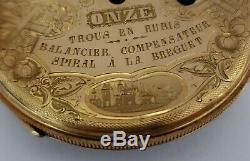 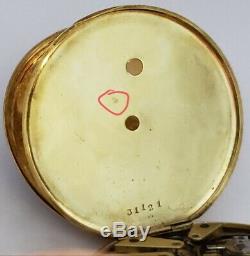 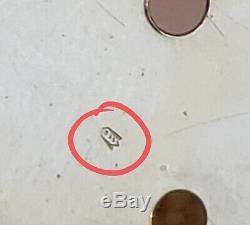 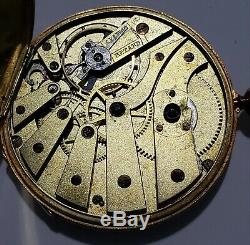 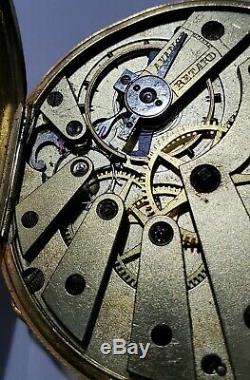 Rare Antique French 18K Solid Gold & Enamel watch by Le Roy, allegedly made for the Ottoman market in excellent condition. Le Roy worked personally for the French King and he was the official. Clockmakers to the Princess Pauline and the Duke de Bourbon and the Ottoman Sultan. The watch has a full gold case, decorated with enamel and diamonds in the back-cover.

Dial: made of white enamel, with decentralized second at "6". Dial and hands in very nice condition. Amazing dial with Ottoman ciphers and perfect condition enamel decoration. The inner back-cover is richly engraved and has the Le Roy brand and the below description. ECHAPPEMENT LIBRE A ANCRE LEVEES VISIBLES.

TROUS LN RUBIS BALANCIER COMPLESITUM SPIRAL I LI BREGET. It comes with the matching key. Very nice example of a watch of the very best quality, manufactured by L. Leroy & Cie was founded in 1764 by Charles Le Roy in the Quai des Orfèvres in Paris. This was enough to secure the support of the king, queen and court as well as loyal customers all over Europe.

During the French Revolution, his ties to the old regime became problematic for Charles Leroy and almost made him lose his life. During the "Terreur" (a period of revolution that lasted from September 5, 1793 to July 27, 1794), he was obliged to convert his signature into the anagram "EYLOR", which is still on the dials and on the You can find plates of clocks that he made during this period.

Charles Leroy brought his son Louis into the company and changed the name of the company to "Le Roy & Fils, Horlogers du Roi". In 1889 Louis Leroy took over the company alone, whose name was changed to Ancienne Maison Leroy & Fils, Horlogers du Roy, L. Louis Leroy carefully studied the Swiss and French watch production and decided in 1894 to open a factory in Besançon because there were many resources available for the production of high-quality watches. He started his own production by merging different workshops and then left his former Swiss suppliers.

Introduced in 1900 by Louis Leroy and winner of the Grand Prix of the Paris World's Fair. The movement of the most complicated pocket watch in the world consisted of 975 parts with 26 complications and was developed with the expertise of Charles Piguet and was completed in the workshops of L. It remained the absolute benchmark for highly complicated watchmaking until 1989 when Patek Philippe introduced its "caliber 89". For nine decades, this watch was the symbol of the company's technical expertise.

The Leroy 01 (called "La Lucie" in Besançon) is the centerpiece of the collection in the "Museum of Time" in the city of Besançon. When the Parisian business center moved from the Palais Royal to the Opera district at the end of the century, L.

7, Boulevard de la Madeleine. In 1914 Louis Leroy took his brother Léon into the partnership without the Fir. The item "Rare Antique French 18K Solid Gold Enamel & Diamond watch by Le Roy for Ottoman" is in sale since Tuesday, June 2, 2020. This item is in the category "Jewelry & Watches\Watches, Parts & Accessories\Watches\Pocket Watches". The seller is "jaimeyefim2009" and is located in São Paulo.